John Feroleto’s commitment to Buffalo and Western New York runs deep. Born and raised on Buffalo’s west side, after attending the University of Buffalo Law School, SUNY, Feroleto chose to remain in Buffalo to raise his family and practice law.

John Feroleto understands the value of hard work. He is known in the community and by his peers for his willingness to work and go the extra mile.

It shows in the results he gets for his clients.

Other lawyers often ask John to handle their trial matters to maximize clients’ receovery. Trial lawyers know who the best trial lawyers are.

John was named Trial Attorney of the Year in 2012 by the Western New York affiliate of New York State Trial Lawyers Assocation.

He is called on by national, state and local assocations in the United States and Canada to teach other trial attorneys.

Some of the topics are:

Away from the Office Outside of the office, John’s dedication is to his family. Married for more than 30 years, he and his wife, Paula, have three adult children – all of whom have chosen to remain in Western New York.

John is an avid runner, racing from the mile to the marathon, including the Boston marathon.

He also enjoys making his own wine – something his family has done for generations – and cultivating his own vegetable gardens, all of which he is happy to share with others.

John’s love of Buffalo runs deep; he loves the city and the people who live in it. Each year, he dedicates much of his time to charitable causes.

John and his wife, Paula, founded a highly recognized program that offers inner-city youths the opportunity to work as a paid interns in various law offices in Western New York.

Each winter, John’s firm runs a winter glove program, donating winter gloves to those in need.

John serves on the Advisory Council of the Headway Brain Injury Assocation of Western New York. He commits his time and resources to assist those who have suffered traumatic brain injury.

John serves as the gold sponsor for Marcena’s Miracles’ Elephant Run, an event that benefits the Marcena Lozano Donate Life Scholarship Fund, awarded to transplant recipients, with priority given to candidates in Western N.Y. area. This combines John’s love of running and goal of raising community awareness of the importance of transplant donation.

John also helps with other community programs, such as sponsoring a Down syndrom walk/run event, offering presentations to volunteer firefighters, hosting a wine-tasting benefit for not-for-profits, educating people about the dangers of driving while distracted and working at neighborhood clean-up events. Carrie Zimbardi gets results. Results by outworking the other side. When you get to know Carrie, you will understand. She started at the bottom and worked her way up. She began as a legal assistant in a personal injury firm, then a paralegal, and eventually she became office manager. After mastering those positions, she earned her degree at the University at Buffalo School of Law.

Remarkably, Carrie started law school while continuing to work, and caring for her two-year-old twin boys. She studied while her babies slept. As an undergraduate and law school student, she competed in multiple mock trial tournaments across the country, earning numerous “Best Attorney” awards for her trial skills. 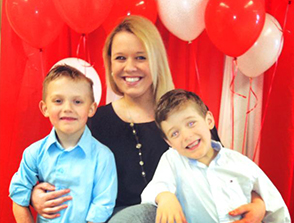 In the legal community she is earning a reputation for her hard work and quality representation of her clients. She is a passionate advocate for the people she represents.

Carrie’s pride and joy are her twin boys, Benjamin and Brady. She loves spending time with them and their extended family, especially camping at their family campsite. She and her sons are enthusiastic Buffalo Bills and Buffalo Sabres fans and thoroughly enjoy watching the games together. Joel Feroleto received his Juris Doctor from the University at Buffalo Law School. He is an alumni of Canisius College and Saint Joseph’s Collegiate Institute in Buffalo. Prior to joining Feroleto Law, he worked at a large New York City based firm focusing in banking law and an upstate New York firm with a practice limited to catastrophic injury. He has appeared in various New York Courts from trial through the appellate level. Outside of work Joel Feroleto is active in the Western New York community. He has served on the Board of Directors of Housing Opportunities Made Equal (HOME) and is a member of the Good Government Club, the New York State Academy of Trial Lawyers, and the American Association For Justice.

Away from the office Joel enjoys running and cycling and competes in events including the triathlon and marathons. They said it couldn’t be done. With five children, a job and maintaining her home, Jill Wnek said she planned to go to law school. Friends said it was impossible, wait until your kids are grown up. Not Jill. Not only did she go to law school, she attacked it with a passion. Jill earned her Juris Doctor degree from the University at Buffalo Law School where she also competed for and won a spot on the highly regarded journal, the Buffalo Law Review and became an Associate Editor.

Jill volunteers. At her children’s schools, she provides help any way she can, whether it be in the classroom or coordinating large school events. She has a strong desire to help her community. Jill knew she could be a more effective advocate as a lawyer.

At the University at Buffalo Law School, she volunteered through the law school’s student Volunteer Lawyer’s Project, helping people who could not afford legal representation in Erie County, New York Family Court and Federal Court. Megan Bechard was born and raised in the Buffalo, New York and is a graduate of John F. Kennedy High School. She obtained her bachelor’s degree in Business Marketing from Buffalo State College. Shortly after graduating Megan started her career in the legal field working as a plaintiff personal injury paralegal. She wanted to extend her knowledge of law and has since come to us with two more years of defense personal injury litigation experience. Before working in the legal field, she worked in customer service as a shift manager at Pier 1 Imports.

Megan enjoys the close-knit atmosphere of working at Feroleto Law. She takes pride in being able to diligently focus on each and every case she helps to handle.

She possesses a genuine compassion and understanding for our clients and respects the specific intricacies which may confront each client.

Megan understands the frustration and fear that people feel after they or their loved ones have been hurt by others and the lengths insurance companies will go to to protect their large revenues. She personally commits herself to professionally serve each client to the best of her ability. Being a paralegal and advocate for our clients is something that she holds in high esteem.

Megan enjoys spending time with her family and fiancé Mike. She is an avid football and Buffalo Bills fan. In her free time she also enjoys finding new and exciting things to do in Buffalo and is intrigued by its rich history. She loves to be in the kitchen cooking and baking as well as being outdoors hiking, fishing and camping. Nicole cares. And she gets it. She worked for a major insurance company for 10 years handling claims.

Nicole cares about the people we represent. She relates. She suffered major injuries in a bad car crash. In fact, after dealing with insurance companies in her own case, she left the claims adjuster job. She earned her paralegal degree and now works helping others injured, in times of need.

Nicole cares about our community. She and her husband Shamark Dalton open their home to children who are placed in foster care. Nicole and Shamark make them part of the family and give them love, guidance and support. In fact,  she and her husband were honored by the Buffalo Urban League with the 2019 Life Time Family Award for help to children from troubled homes, and their volunteer work in the  community.

In the community, Nicole serves as a Deaconess at First Calvary Missionary Baptist Church where she teaches Bible Study to 2-5 year olds and provides guidance to older kids. Nicole and her husband have three natural children in addition to foster children. She seeks to instill in them the need to be thoughtful of others and remain humble by, as a family, contributing at church and volunteering at  soup kitchens. The kids are also involved in typical activities such as school plays, basketball and baseball.

You are a person, not a file when Nicole is part of your case. You want Molly Vera on your side. Molly is a born advocate. Sometimes people who are disenfranchised or don’t speak the English language can lose out.Not when Molly is involved. Molly likely has more court experience than most attorneys. As a social worker she was a court liaison between her clients and the Courts in very complicated proceedings. Often, she used her fluency in Spanish to bring together her client needs and court expectations.

Molly gets things done. While working at the Learning Disabilities Association of WNY she was key in designing a learning assessment for Spanish-speaking adults. This resulted in the well-known Empire State learning needs screen used by educators, social workers and Courts. She has been asked to speak to audiences in different states, and Puerto Rico on finding creative solutions in eliminating obstacles that prevent people from having fair access to available services and programs. At FeroletoLaw Molly enjoys working with our clients and being a strong advocate – particularly in dealing with insurance companies.  With her understanding of the legal system, she’s able to help you navigate through difficult times.

Molly has lived in New York City, and Spain, but returned to Buffalo where she lives with her dog, Linus (the linebacker) and enjoyed everything the city has to offer. She roots for the Bills and the Sabres and embraces the Buffalo pride that makes our city exceptional.